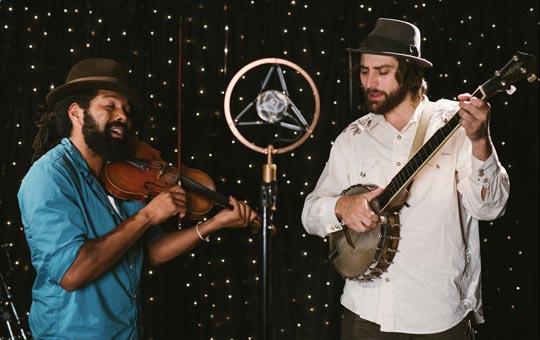 I have always loved bluegrass music. The mixture of old-time gospel sounds, insane instrumental abilities, and improvisational ability reminiscent of jazz had me hooked the first time I heard it. I love hearing musicians at their peak, throwing things at each other, playing over and under melodies, jamming and returning to a structure. So it was with excitement that I popped duo Ben Hunter and Joe Seamon’s “Take Yo Time” into my computer and clicked on the first track. The album note promised dancing, good times, and an educational expedition of my musical heritage as an American.

The first song, entitled “Jazz Fiddler”, was compelling, fast-paced, and technical. The combination of  Hunter’s fiddle and Seamon’s banjo made the piece catchy despite minimal vocals, leaving no doubt for anyone unfamiliar with their music that these guys could play. The second, “Mississippi Heavy Water Blues”, was similarly technical. Despite the title- it was another bluegrass song- I found myself mesmerized by the proficiency and passion with which the tandem played.

My favorite track, the fourth, was very clever – a cover of a Duke Ellington’s “Jungle Nights in Harlem”. Covering a big band song on a fiddle and banjo-which is a courageous act in its own right- at first resulted in discordant chords and off-kilter melodies. Then, Hunter’s fiddle kicked off, and I found myself thinking once again, Damn, this guy can really f’ing play! With a kazoo to add some flavor, frantic fiddling, and the banjo twanging alongside, it played like a bluegrass Big Bad Voodoo Daddy.

Two catchy, lyric-driven pieces followed – “Long Tall Mama” and “Goin’ to German” – that steered the album away from the fast technical pieces and into a middle zone of easy listening.

With an awesome rendition of “Buck Rag” right after this to break it up (which, by the way, was played in a much more difficult style than necessary: instead of having one instrument take the piano left hand and the other take the right, the fiddle led and the banjo followed both parts, scaling the piano piece with ease), the boys zoomed into some blues and gospel. Notable among these was “Preachin’ Blues”, a devilish-sounding number with a lot of fiddle finger picking that dove back into some of the technical sounds that Hunter and Seamons experimented with at the start of the album.

The finale stretch of the album featured some more catchy tunes and another non-vocal rag to break up the style. The last song, “Some of These Days”, felt like a period to a beautifully constructed sentence, featuring a percussive clap as beat punctuation and the banjo carrying us out alone.

What strikes me most about Hunter and Seamons’ work is that instead of messily showing off their chops, like many bluegrass artists are prone to do, they are mature enough to slow down and actually play together. Sure, there are plenty of virtuosic moments and killer solos, but the two men consistently prioritize song over self in a way that kept me engaged and entertained.

Another aspect that stands out is the album’s cohesion as one piece of music. Too frequently, with single track downloads taking precedence over whole albums, artists pay far too little attention to the order of songs, the flow of the album, and what the listening experience is like front-to-back. Hunter and Seamons, however, clearly had this in the forefront of their brains, and took the time to ensure that the songs told a story: from fast-paced and technical to catchy to blues, all broken up with ragtime. I loved following the flow of the album from cover to cover, engaging not only with the individual songs, but with the larger song of the piece as a whole.

The only slight disappointment I had with the pair’s exceptional album was that it contained nothing but covers of standards. With the technical skill that Hunter and Seamons possess, in addition to their proficiency at crafting an album, I hungered for an original piece or two amidst the classics. Next time around, I hope the duo branches out and offer us up some of their own work.

The Bottom Line: Ben Hunter and Joe Seamons have crafted an excellent album, managing to showcase their excellent musical prowess while creating a cohesive piece of art. Well worth “taking the time” for repeated listens.