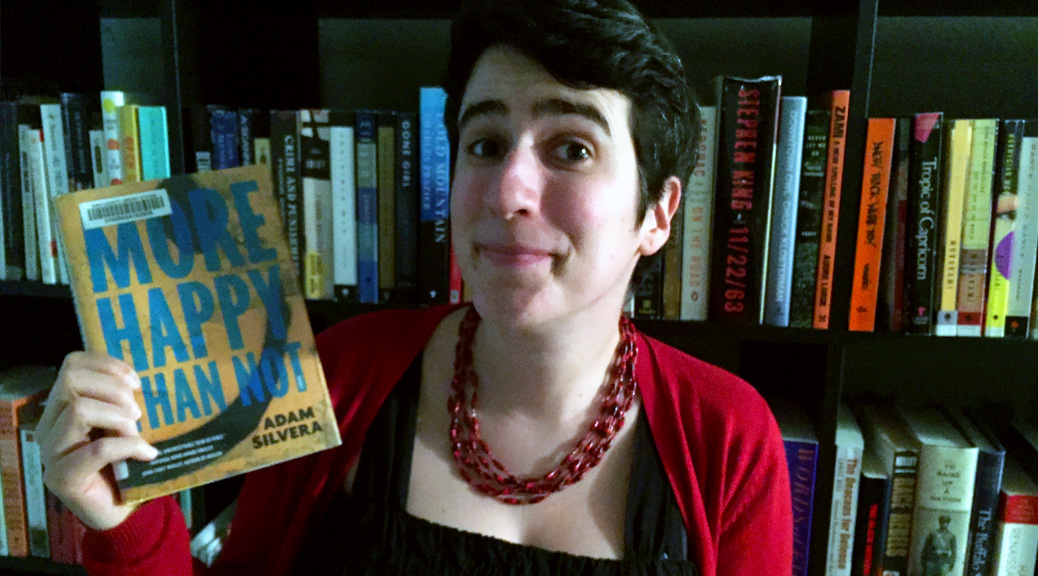 More Happy Than Not by Adam Silvera is the single most underappreciated book of 2015. Silvera invites us into a perfectly described world, with an astoundingly complex and beautiful cast of characters, and a subject so contemporary and familiar that somehow manages to tell a completely unique story. How it didn’t rack up every YA award and prize imaginable, I cannot tell you.

More Happy Than Not is told from the perspective of Aaron Soto. A teen who was born and raised in the Bronx, on the same block, in the same housing projects his whole life. Silvera himself is from the Bronx and the realness he brings to Aaron’s world is pure perfection. This is the story of a neighborhood, a housing projects community. While so many YA novels tell stories of teens who can just up and leave for a joy ride or a soul searching trip, Aaron Soto lives just a subway ride away from all bright lights of New York City, and the farthest we see him travel is the ten-block walk to his girlfriend’s place.

Aaron’s social world is fairly small, he and his brother barely speak. His mom works two jobs to make ends meet, so he barely gets to see her – awake, anyways. And his relationship with both is pretty strained since his father committed suicide earlier in the year. He has had the same group of friends his whole life: Brendan (his sort-of best friend, who’s been kinda a dick lately), Nolan, Skinny-Dave, and Baby Freddy who are all around when you need someone to play a game with; and Me-Crazy, the kind of kid who you’re better off just avoiding. He also has a girlfriend, Genevieve, a sweet-tempered artist, who would probably fall into the manic-pixie-dream-girl category if this was a more generic story.

And all of that is turned on its head when he meets Thomas. They chance upon each other when Thomas is breaking up with his girlfriend as Aaron hides in the nearby alley (he’s playing “manhunt” with his friends, which is like a high-stakes version of “sardines”), Thomas helps Aaron squeeze through a gate, and they hit it off instantly. Aaron’s relationship with Thomas is totally different from anyone else he spends time with. They talk about their feelings and relationships, their dreams, they even reveal to each other their passions (for Aaron, it’s comic art and for Thomas, it’s film). It was a breath of fresh air for me as a reader that Aaron had such an emotionally honest relationship with Thomas, all the other young men in his life are distant, cold and constantly giving him shit (which, to my basic understanding, is fairly accurate as to how young male friendships work).

Aaron’s relationship with Thomas runs so deep that he begins to question whether he’s straight. When he starts to affirm these questions Aaron decides that he wants to go to the Leteo Institute to get a memory-alteration procedure. Oh, wait, did I forget to mention that there’s a place in this book that can 100% no bullshit erase unwanted memories, and they have a location in Aaron’s hood? Because yeah, that’s totally a thing. Which is to say this book is using science fiction to explore the human experience (why didn’t it win all the awards?! WHY?!).

And now I have to officially stop giving you plot points, because I am literally on the verge of spoiling this entire book for you, dear reader. But I can still talk about all the big picture things this book is about. This book is about relationships, how they’re good, and bad, how sometimes they’re unhealthy patterns, sometimes you don’t read them right, and sometimes they will surprise you by how rich and powerful they can be. This book is about toxic masculinity, and how devastating the costs of that culture can be for a young gay man. This book is about forgiveness, and unlike many YA books it draws the distinction between people who deserve our forgiveness and those who do not. This book uses science fiction as metaphor to condemn conversation therapy, heartbreakingly, and completely. But more than anything this book is about the the immense importance of finding happiness in who you really are, no matter how unideal that person might seem to be to you, and about the impossibility of finding happiness if you cannot accept yourself.

I would recommend this book for mature readers, both in reading level and emotionally. I would like to put a big trigger warning on this book for suicide of a family member, surviving a suicide attempt, description of an act of suicide, and homophobic violence. That said, I think this is a fantastic book for readers who love tender stories of self discovery. Who want to have more intentional friendships in their lives. Who are struggling with who they are, and need assurance that they are enough. Who want to read about a queer person of color growing up in the projects. Who think science fiction is at it’s best when it is a metaphor for real things people go through. Who want to read the best damn book published in 2015!

I think Adam Silvera is a voice we desperately need in YA literature. Obviously because he brought us this authentic story of a queer teen of color in the projects, and we need those stories to be out there, so the real life LGBTQI+ urban kids can find them, and so everyone else will know that they exist. But even beyond that really important achievement, I think Silvera has done something truly astonishing with More Happy Than Not. He is holding up a mirror, just different enough from the real world that we don’t have to see ourselves in it, so that we can see clearly how devastating the problems we create are.

Maggie Block is a South End-area Teen Services Librarian. She is very new to the Seattle area – she only moved up here in late August of 2015. She hopes to use this column as an opportunity to recommend amazing books that reflect the South Seattle community back to its young readers. While her expertise as a youth librarian in the community will help when writing these pieces, she writes these articles on her own time, and the opinions she expresses are purely hers and in no way reflect her library system or anyone else they employ.

One thought on “Rad Books for Rad Kids: Self Discovery, Sci-Fi & Struggle in “More Happy Than Not””