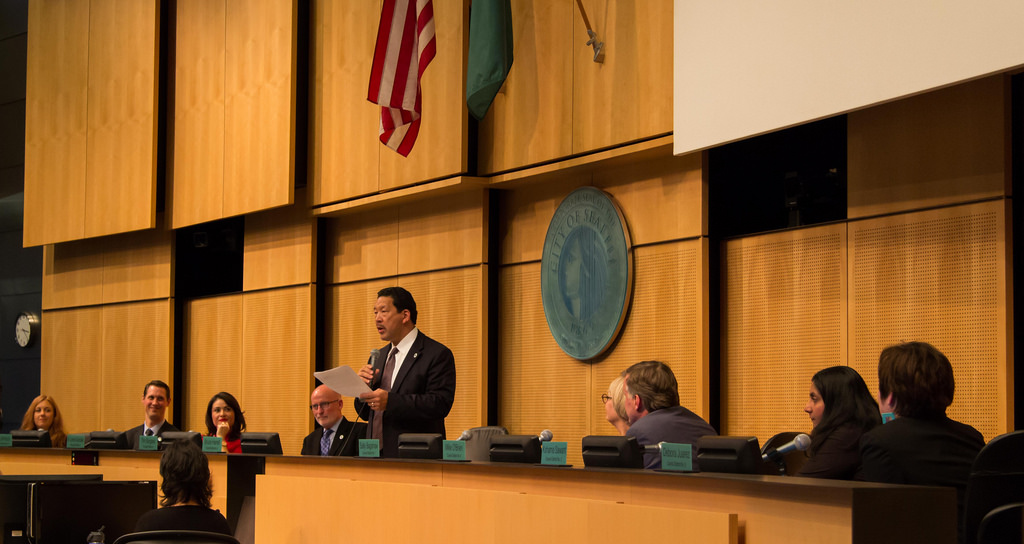 The arguments for the Seattle City Council’s 2015 transition to district elections (of the nine seats, seven are elected by district and two are at-large) are well-chronicled.  District elections increase the prospects for the representation of people of color by enabling districts with large concentrations of them to maintain their demographic voting advantage, which would be diluted in a citywide race.  Indeed, the 2015 elections produced a council with five women, four people of color and a socialist.  Second, the lower spending requirements for district elections induce more candidates to run, which increases the scope of public dialogue.  In 2015, there were 47 candidates (for nine seats) relative to 10 candidates (for four seats) in 2013.  Third, district elections encourage policy that promotes neighborhood distinctiveness.  Fourth, the district focus places an emphasis on the basics of city service – neighborhood policing, parks maintenance, trash collection, etc. – that are at the heart of city government.  Fifth, they generate broader civic engagement and ground-up rather than top-down policy.  Finally, district elections encourage more equal representation across socio-economic groups, rather than a more concentrated representation of affluent interests.

However, it is easy to overstate these advantages.  In the 2015 elections, the candidate who spent the most money still won every election, except for one (where the spending levels of the top two candidates were similar).  Moreover, citywide business interests sought to manipulate district elections by promoting pro-business candidates (e.g., via the establishment of a PAC to oppose the more liberal candidate, Lisa Herbold, in District One).

Nonetheless, the advantages of district elections are considerable, and I strongly support them.  They have also been instituted in Yakima, and there have been (and will continue to be) state legislative efforts to extend them statewide.  Not surprisingly, of the largest 50 cities in the nation, 47 have moved to some form of district election model.

It is important to note, however, that these oft-discussed advantages of district elections deal primarily with their impact on candidate profiles and election results.  A second dimension to the discussion is the impact of district elections on the dynamics of council decision-making.  Here, Seattle is starting to see the results.  A variety of high profile civic issues, including the prospects for potential NBA/NHL franchises, the blueprint for Sound Transit 3, the implementation of the HALA (the Housing Affordability and Livability Agenda) recommendations, and the location of homeless shelters, are revealing certain facets of the new decision making process.

It is not the point of this article to evaluate the merits of these complicated civic issues.  Instead, the objective is to explore what the council debate and votes on these issues reveals about the decision- making dynamics of the new district-based Seattle City Council.

I argue that the district elections have introduced seven new trends in Council decision-making:

As the council is comprised of candidates that emerged in highly competitive races with broad fields to better represent the needs of their districts, one would expect a renewed prioritization of neighborhood needs, but less focus on citywide projects that link the city to state, national and global concerns.  For example, housing needs – a significant concern in every district — have obtained significant attention.  However, the citywide response to climate change is less visible than it has been in prior administrations.  It is challenging to generate a district-by-district movement that results in major policy proposals to deal with the threat of global warming.

With all at-large candidates, the council should tend to vote on issues of facility siting based on what is best from a citywide perspective.  Now, the preferences of each individual district play a larger role in decision-making.  For example, Sally Bagshaw (representing District Seven, which includes Key Arena), who has expressed interest in renovating Key Arena to host a potential new professional sports franchise, voted to not vacate Occidental Avenue, which would have increased the prospects for a sports franchise siting in the Stadium District.  Similarly, debate over homeless shelter locations has been driven by district-level concerns.

Megaprojects, such as Sound Transit 3 ($50 billion over 25 years) confront numerous decisions that are best made from the perspective of the overall system.  The initial Sound Transit 3 neighborhood input sessions have revealed numerous concerns over issues such as delayed light rail service in West Seattle (17 years), Ballard (22 years) and at the Graham Street Station (serving predominantly minority communities, 20 years) as well as the omission of a 130th Street Station (in District Five, represented by Debra Juarez).  It is essential to raise these neighborhood concerns and to deal with them effectively.  Yet it is also essential to realize that one needs to adopt an overall system perspective to balance the tradeoffs inherent to specific proposals.

District elections create an enhanced role for the mayor.  One of the mayor’s primary responsibilities is establishing a strategic vision for the city.  Instead of nine at-large officials focused on the aggregate needs of the city, there are now two.  This establishes a relatively larger role for the mayor.  For better or for worse (depending on one’s political ideology), this model is conducive to Mayor Murray’s leadership style, which seeks expanded influence.  That being said, the vote to oppose the Occidental Street vacation (which he supported) demonstrates the limits of his influence.

There are two dimensions to the structural inefficiency introduced by district elections.  The first is the need to incorporate a multiplicity of perspectives – district by district, rather than city at-large — into policy decisions.  The second is the decreased opportunity for issue specialization and expertise – each council person must have a reasonable knowledge of the full range of issues to assess how they will impact his/her district.  These inefficiencies are already manifesting themselves in the recent proposal to add nine legislative aides to the council staff.

In a district system, there is the possibility to pit district needs against one another, thereby precluding consensus, as a means to enable business interests to pursue policies that promote their financial interests at the expense of select neighborhoods.  For example, one of the HALA recommendations calls for the use of mandatory inclusionary housing by commercial developers.  This requires reserving a certain percentage of new development for affordable housing.  However, there is a provision that allows for the payment of fees into a fund to build the housing elsewhere, rather than within the new construction itself.  This provision is now being exploited in South Lake Union, where developers will pay the fees instead of including the affordable housing in new construction, which will eventually lead to lower income housing being built in other neighborhoods.

With district elections, there is significant overlap between the geographic territory represented by state legislators and City Council members.  For example, the 37th State Legislative District has substantial geographic overlap with the 2nd City Council District.  This creates more opportunities for collaboration between state and city elected officials on policy that can be pursued at both levels of government.

As noted previously, I strongly support district elections, and favor their extension statewide.  However, much of the evaluation of district elections has focused on the implications for candidates and elections.  There has been less discussion about the implications of district elections on council decision-making processes.  A number of recent policy issues, including the Occidental Avenue vacation, Sound Transit 3, HALA implementation, and homelessness (amongst others) are providing a window into these new decision-making dynamics.  There appear to be a number of emergent trends in council decision-making.  These must be considered when making an overall assessment of Seattle’s new district-based election model.

John Stafford is a Senior Substitute Teacher for Seattle Public Schools and a former partner for Strategic Planning Associates, a management consulting firm in Washington, D.C.  He ran for State Senate in the 37th District in 2014.  He is writing a monthly article on public policy for the South Seattle Emerald.