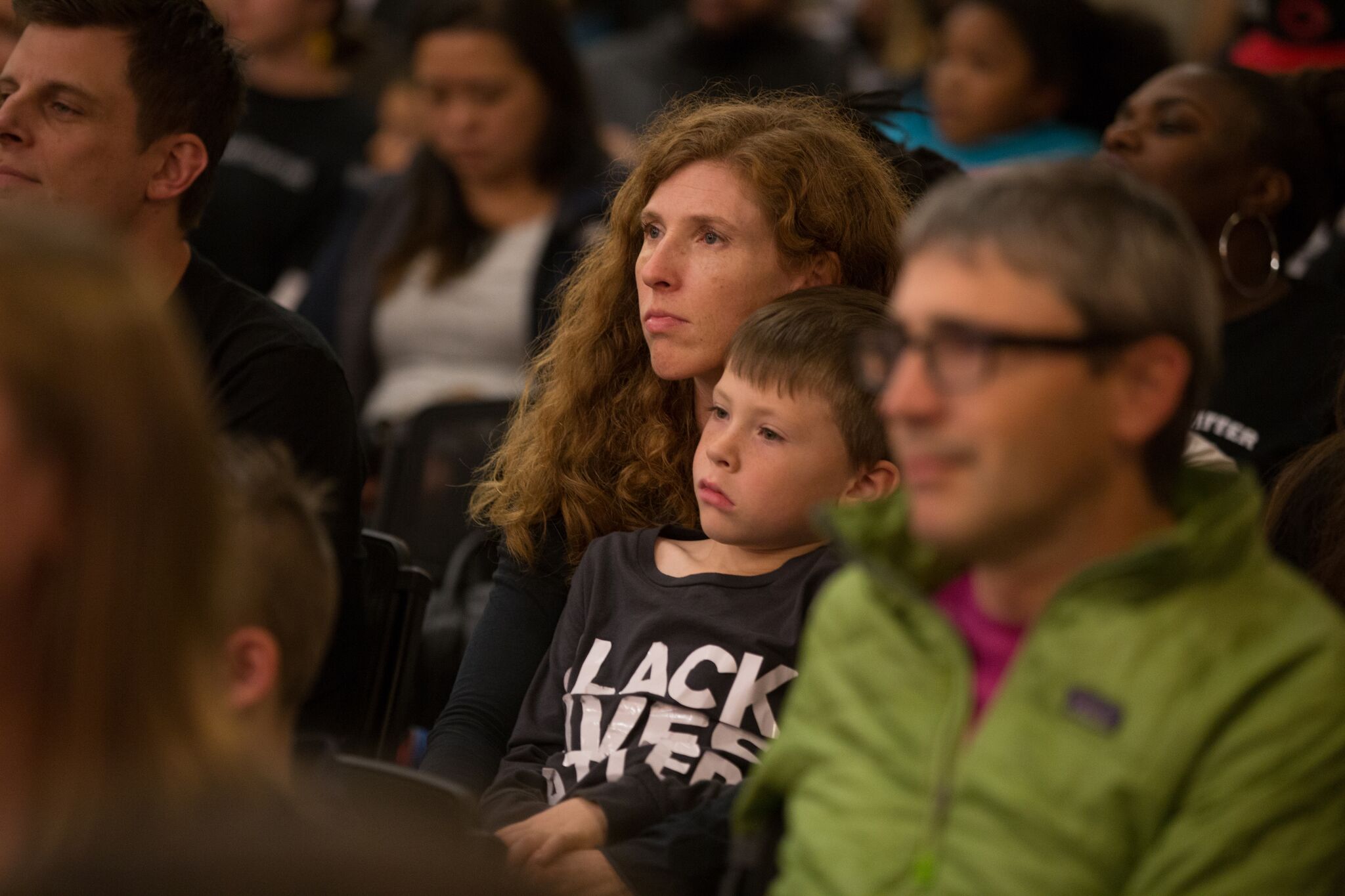 We were struck by a recent KUOW report about parental backlash against last fall’s “We Stand United” event in Seattle’s public schools. On October 19, 2016, many Seattle Public Schools teachers wore Black Lives Matter shirts to school, and offered teachings on Black history and institutionalized racism to bring focus to racial equity. But many white parents – especially in the north end, where few students of color live – wrote angry emails in response. Their reaction suggests that many of us white liberal parents have work to do when it comes to race.

It’s hard to imagine an environment where frank conversations about race are more badly needed than at Seattle Public Schools. Our district has the worst opportunity gap between white and black students in the state, and the fifth worst in the nation. Some of the parent emails acknowledged this gap, but asked it not be discussed openly. Instead, they suggested teachers “work diligently and quietly” to address the gaping disparity. They complained an open discussion of racial issues was “too militant, too political and too confusing” for their children.

We sell our white children, and children of color, short by assuming they won’t be able to understand racial injustice. Kids understand when things are unfair – it’s adults who often struggle. In the face of ongoing racial injustice, we white Seattleites can often be, as Dr. Stephan Blanford points out, strangely passive. We say we want everyone to have access to the same opportunities, but few of us are truly prepared for the work of turning words into action.

Some of our unpreparedness stems from what academic Robin DiAngelo has termed “white fragility.” DiAngelo notes most whites “have not had to build tolerance for racial discomfort,” and as result, like the angry parents who complained about the “We Stand United” event, we often attempt to shut down those who raise the issue of race. Operating uncritically within a system that was designed for people who look and live like us, we cling to an ideal of “colorblindness” which perpetuates a racist status quo.

How, then, do we show up as active – rather than passive – progressives? DiAngelo urges us to start by seeing “white racism is ultimately a white problem and the burden for interrupting it belongs to white people.” Or, as Ijeoma Oluo says, “Look for where your privilege intersects with somebody’s oppression. That is the piece of the system that you have the power to help destroy.”  White parents, then, are uniquely situated to challenge institutional racism in our education system – and conversely, to uphold the status quo by resisting the understanding that our system, as it is currently designed, does not distribute opportunity fairly.

A necessary first step is to educate ourselves about the historical and continuing factors driving our district’s shameful opportunity gap. The first is poverty, which has long been associated with a higher likelihood of poor academic outcomes. The 34% of students in Seattle Public Schools living in poverty – including the 3,000 students who experience chronic housing instability – are disproportionately children of color. A legacy of racially discriminatory lending and housing laws and practices has ensured students of color are concentrated in specific neighborhoods. And because of a 2007 U.S. Supreme Court case banning the use of race as a factor in school admissions, many students of color are concentrated in severely segregated schools.

A second major factor underlying our opportunity gap is the way our educational system values white middle-class knowledge, behaviors and priorities. Add that to an overwhelmingly white teaching force that studies show “tends to underestimate the academic abilities of students of color,” and the product is a system that operates to entrench and magnify existing disadvantage.

Armed with this knowledge, we must move to consider the extent to which our own most cherished practices are  perpetuating the dynamics underlying the opportunity gap. Encouraging steps have already been taken in Seattle to begin to address the cultural biases of our educational system and to introduce the sort of culturally sensitive and relevant pedagogy benefiting all students. Examples that have gained the support of many white parents include the recent push to introduce an ethnic studies curriculum across the district, and Garfield High School’s new “Honors for All” program.

However, we white parents have made less progress in understanding our contribution to the glaring resource gap between our majority white schools and those that are majority students of color. One practice we believe needs immediate examination is PTA fundraising for school day programming. Studies have shown PTA funding is a significant source of inequity in public schools nationwide. While all Washington schools are underfunded, very few communities have the means to add up to $1,000 per student to their core school budget. While SPS attempts to engage in more equitable budgeting that aims to address this imbalance, the truth is that the gap is so large it cannot begin to do so.

If we truly want to be genuinely progressive, we must be willing to critically examine our contributions to inequity in our school district – and we must act to effect change. Our district’s track record shows  if we white parents were to collectively urge SPS to address race and equity on a sustained basis, we would be very likely to see results. If we’re brutally honest with ourselves, many of us hesitate to act out of fear that speaking out against inequity will require us to make what feel like unbearable sacrifices. But doing so may be the only way to create the world we say we want to see. And that is something all of our children deserve.