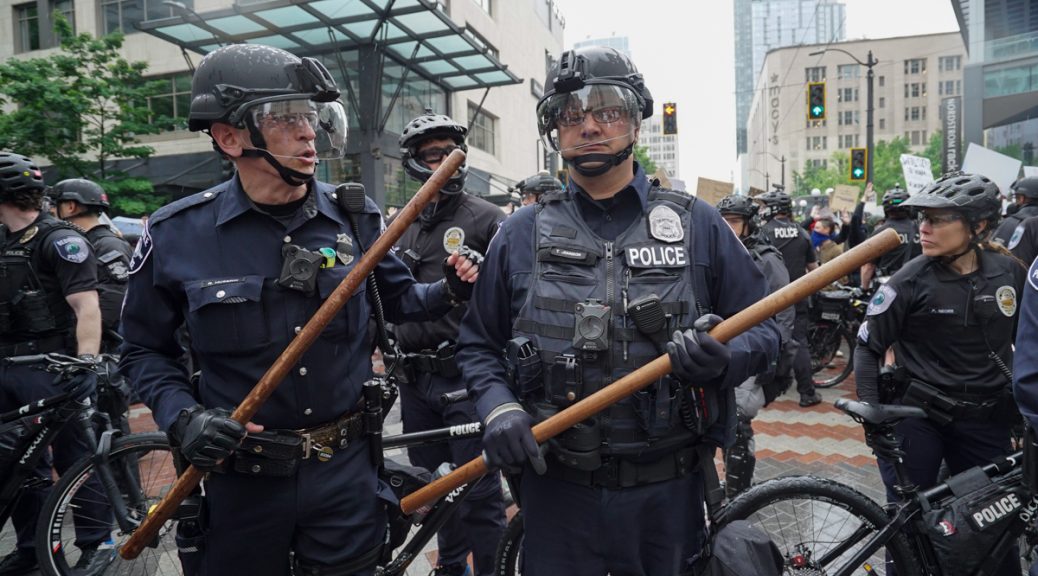 Police officers are allowed to cover their badge numbers, when in mourning, because they are required to wear their names on the left side of their uniforms, Mayor Jenny Durkan said in a press conference on June 1.

In a response to a question from the Emerald, Durkan said that she does not believe “there has ever been a circumstance where someone has made a complaint against an officer where we have not been able to identify who the officer was.” She said the mourning bands are worn until officers can hold a service for their fallen comrades and that there are two officers from other law enforcement entities — whom Seattle Police Department (SPD) Chief Carmen Best talked about the day before — whose memorial services had not yet been held due to the current novel coronavirus pandemic.

“There was no attempt by anyone to cover the badge numbers. We will look at the policy to see if even on mourning badges there can be a way for a badge number to be displayed,” Durkan said, addressing concerns from protesters and citizens about police officers’ badge numbers being covered up, thereby making it difficult to identify officers in potential misconduct situations. “The badge number is a fallback. It is an unnecessary redundancy. It is their name that is important.”

She also said that the Seattle Police Department knows which officers are deployed in different parts of the city.

In its research prior to the press conference, the Emerald found that the Seattle Police Foundation authorizes and offers mourning badges with badge numbers inscribed upon them, as an alternative to the traditional black mourning band that covers up an officer’s badge number.

A public information officer with the Mayor’s Office followed up with the Emerald after the press conference with information showing there is no requirement to display a badge number, only a last name and first initial.

The Emerald found an SPD roster from 2016 with the names of all the officers in the department. The roster, obtained by MuckRock user Phil Mocek, shows that there was overlap in last names and first initials, as well as apparent gender, and overlap in rank or title and unit. The Emerald did not count the instances of overlap but asked the Mayor’s Office if there are any officers with the same first and last names currently on the force.

The Mayor’s Office said that if officers do have the same names, “there are many ways [the Office of Police Accountability] can quickly determine which officer is involved in a complaint. The quickest way OPA would do that is to use the date and location associated with the complaint to determine which officer was involved. If necessary, OPA may review body cam/car cam footage, or footage from surrounding buildings.”

According to previous press conference briefings, police officers turned off their body cameras, during the protests over the past weekend.

The Mayor’s Office said that if using date and location does not work, and body camera footage is not available, OPA “may review footage from surrounding buildings (as many businesses have video cameras), and combine that with interviews of other officers and witnesses to determine which officer was involved.”

Many people at the protests and online noted that in images and videos, it was not easy to identify officers involved in what appeared to be misconduct.

In response to several tweets by The C is for Crank’s Erica C. Barnett regarding Durkan’s response to the Emerald, one person asked if the city was able to identify an officer who holds down a person dressed in an orange jacket via a knee on the person’s neck, and does not heed the yells of, “Take your [expletive] knee off his neck!” Another pointed to a picture they had taken that shows the officer’s name is illegible in the picture.

A reader also sent the Emerald a picture that shows a police officer who appears to be wearing a name tag, but it is illegible in the picture. The picture is included below.

The featured image in this article that indistinctly shows officers’ last names and first initials was made with a professional Sony 7s camera by the Emerald‘s Susan Fried. She made the image below, which clearly shows the officer’s name, with the same camera and a long lens (a 70-200 mm).

Featured Image: Police officers at the protest in Seattle, Washington, on May 30, 2020. (Photo: Susan Fried)