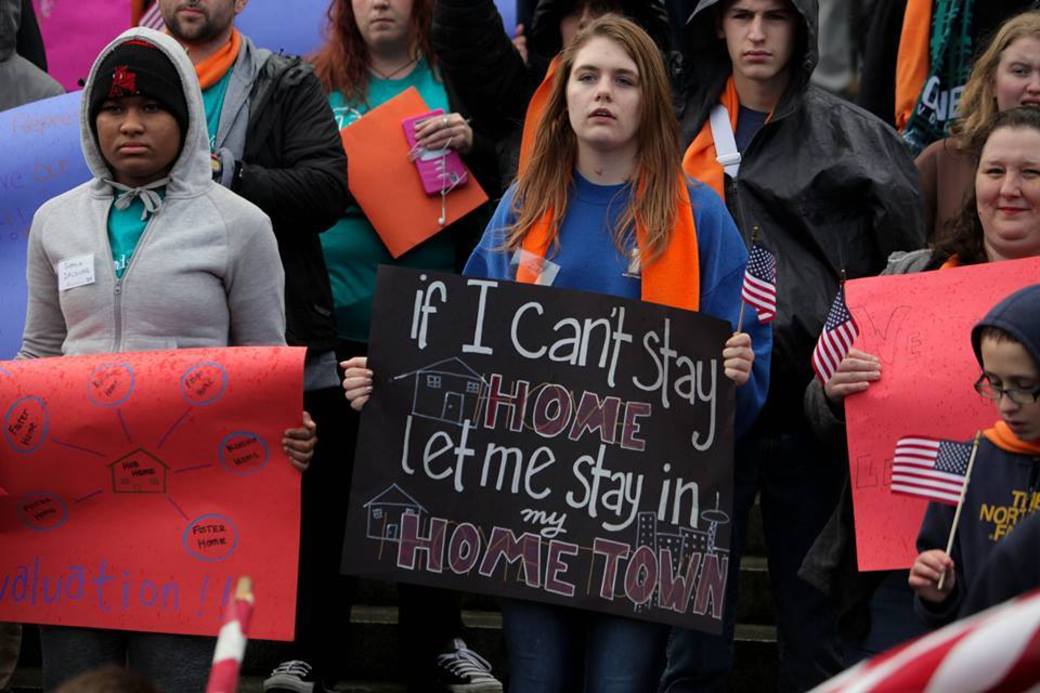 Ishmael Jacob Daniel Simpson is dynamic and engaging. He is well-spoken and as chocked-full of enthusiasm and passion as any person his age. In some ways, he is typical of many young adults – from the big plans he has for his future to his commitment to the art he creates.

The difference is how Simpson — who goes by Ish — grew up.

He transferred in and out of shelters and group homes every 30 days from age 11 to age 18. Unable to find places that would take a frequent runaway, he was shunted around and denied access to schooling or support. His only adult interactions were with employees who came and went on shifts.

Simpson stopped going to school for years, battled addiction and fought everything from abuse to starvation. His story may seem sensational and unique, a tragic but atypical upbringing. Unfortunately, this isn’t the case. Simpson’s trauma is typical. His experience is akin to that of many children growing up in foster care.

Kids who are raised in the system carry this trauma into adulthood, and often need support after they turn 18. After growing up in a world that fails to provide the tools they need to succeed, their transition into adulthood is daunting and often downright impossible without help.

The Mockingbird Society, an organization committed to improving foster care and ending youth homelessness, works to bolster existing programs that help teenagers transition into adulthood. They achieve these goals through two avenues: advocating to ensure that youth in foster care are heard by legislators, and implementing the hub model of foster parenting to create a stronger community.

For example, Mockingbird youth and advocates will travel to Olympia Jan. 26 for a day of advocacy to support the agency’s legislative agenda. It’s called Youth Advocacy Day and begins at The United Churches of Olympia at 8 a.m.

The End of Foster Care

Ezra, a 21-year-old working at The Mockingbird Society as a youth advocate who requested his last name not be printed, highlighted why it is important to help kids who are stuck in a system that has been less than kind to them.

“Unexpected events caused me to be exposed to things that I shouldn’t [have been] exposed to,” Ezra said. “Moving consistently from home to home, from county to county, from school to school — I never had time to have a normal life.”

Simpson and Ezra are now out of the traditional foster care system and in Extended Foster Care, a program aimed at easing the transition from living as a child in the system to becoming an adult. Extended foster care began in 2006. Previously, there was a hard cut off of resources for youth once they turned 18. Now the program provides 18-year-olds who meet certain criteria with $700/month of assistance until they turn 21, at which point they are on their own.

Expanding eligibility for Extended Foster Care, or EFC, is just one of the several goals that The Mockingbird Society has as part of their legislative platform.

“Extended Foster Care is the most effective strategy we have for making sure youth who turn 18 have housing and support when they aren’t ready to be out there by themselves”, said Rep. Ruth Kagi, an advocate for foster youth rights.

Although EFC is a marked improvement from the previous hard cut-off method, it still leaves much to be desired in terms of support for this group, which is at the highest risk for homelessness, addiction, and displacement of any age of foster youth.

Under the current EFC guidelines, a youth has to opt-in before they turn 19. If they find out too late, or initially refuse participation in EFC and then change their mind, they are left with few options.

Foster youth often are eager to get out of the system, leaving crucial support on the table.

“There are other people in the foster care system who have been hurt so badly that they don’t trust anybody”, Ezra said. “They just want to get out.”

There are several conditions required to remain eligible for extended foster care: A candidate has to be working or in school. If they lose their job or need to step out of a school program, they lose their payments. The goal of these initiatives is to make it easier to get into and stay in the program.

The Mockingbird Society is working to implement a longer 6 month grace period within EFC.

And according to Ezra, people will continue to struggle when they turn 21.

“It’s still not enough”, Ezra said. “I mean, three years isn’t enough for all of the years of being in the foster care system. And having to endure all of the pain and struggle. All of the stories and experiences I’ve had, even now that I’ve aged out, even now that I’m 21, it’s something I’ll have to live with for the rest of my life.”

“Foster kids are marketed as transactions”, he continued. “People see children as income. They take that extra income and don’t help the child…Then when you’re 18, the state just gives you the money and expects everything to be okay.”

Services for young adults like EFC can make a difference for youth leaving the foster care system, but early intervention is the most effective strategy for ensuring a smooth transition from youth into adulthood.

“There are so many creative ways [to set up children for success] when we identify youth early on who are struggling,” Kagi said. It is much easier and more effective to help a child early on in their life than to try to retroactively repair years of damage and trauma at a later age.

Along these lines, the Mockingbird Society works to help children remain in their communities. They keep families together, and when this isn’t possible, they work to keep youth in the same geographic area. Staying at the same school, being near the same friends, participating in extra-curricular activities, attending the same church, and maximizing known factors all provide comfort during a difficult time.

This hinges on the second of The Mockingbird Society’s platforms: the hub model of foster parenting. Under the proposed hub model, veteran foster parents act as the main point of contact for six to 10 homes in a community. They provide two open beds for emergency and planned respite care for the kids in the hub. They also host monthly dinners, and are mentors for training new foster parents.

“We want to create a community within a community”, Blackledge explained.

This also holds foster parents accountable. The Mockingbird Society has seen a reduction in the number of allegations of abuse since implementing the hub model. Having many adult eyes on children means that there are fewer opportunities for cruelty. Kids also fabricate fewer allegations because they have options if they are in conflict with their family — they can move to another home within their hub.

“Kids end up in places where they’re victims of recurring trauma”, Ezra said. “They move out of their homes due to unsafe situations, then the same things happen in foster care. It affects their likelihood of having normal lives. And then [social workers] are saying ‘where’s the proof’ and they don’t have it —that’s where kids fall from the system.”

The Mockingbird Society’s hub model seeks to prevent these youth from slipping through the cracks.

The hub model also strives to keep siblings together. One family may not be able to accommodate six siblings, but a hub often can, ensuring that the trauma of being placed in care is minimized.

All of this goes a long way toward creating a community that will raise a child with the skills they need to face adulthood when they hit 18, instead of scrambling to figure out how to navigate adulthood with no guidance.

Simpson’s experience in the system speaks to the need for early support. Moving from group home to group home every 30 days left him with little ability to attend school, let alone excel. Eventually, his grades were so poor that he dropped out. Without the support he needed from day one, Simpson got further and further behind. He was able to catch up with the help of Treehouse, a nonprofit working to help youth in foster care graduate high school after they’ve fallen behind.

When he first met with Treehouse staff, Simpson set the goal of wanting to be done with high school in a year.

“I was a sophomore”, he said, laughing. “I had 9.5 credits, and I looked at [my education supervisor’s] face to see what she looked like when I said that, and she was like, ‘Let’s run it. Let’s do this.’”

His story is an example of how a little help can go a long way — and how the lack of it can be ruinous.

Simpson is finding a way to effect change by making art and going back to school to become a substance abuse counselor. He is giving back to his community in as many ways as he can; his art is a way to share his passion for life and community with the world. You can find his art via his Instagram handle: @sober_kid

The Need For More Foster Parents

Many hands make light work, but too few can be ruinous. One of the greatest challenges for the foster care system is the lack of foster parents.

“Our moral failing is as a community,” said Blackledge, The Mockingbird Society’s executive director. “We’ve created this ‘system’ to take care of ‘those kids’ so we don’t have to look. The idea we have in our heads is that ‘someone’ is taking care of it, but systems don’t raise kids, we do, and we’ve abdicated our responsibility as community members for caring for our most vulnerable. It lies at our doorstep.”

Not everyone can be a foster parent, Blackledge admitted, but everyone can help a foster child. If the state becomes the parent, then that needs to be the whole state. Every citizen, agency, school — everyone needs to pitch in. Too much blame gets placed on the system itself and not enough gets put on those who are equally culpable.

That being said, the state also bears responsibility. There are not enough resources for foster parents. Social workers are ludicrously over-burdened. There is a system of care based on outdated ideas.

“There are equal helpings of failing to go around,” she summarized. “And there is equal opportunity to help out all around.”

Blackledge wants to see community looking for solutions more than bemoaning the poor state of affairs – and Ezra agrees.

“I don’t want to hear things like ‘Oh, I feel bad’. So what?” Ezra exclaimed. “I want to focus on what’s happening and what we can change. If it makes you feel uncomfortable, help me change it. Otherwise, you ignore the situation instead of helping those who experience this lifestyle. We can find a way to end it.”

More information on becoming a foster parent can be found here.

One thought on “Fostering Into Adulthood: Mockingbird Society Seeks Improvements in Foster Care System to Help Youth Aging Out”