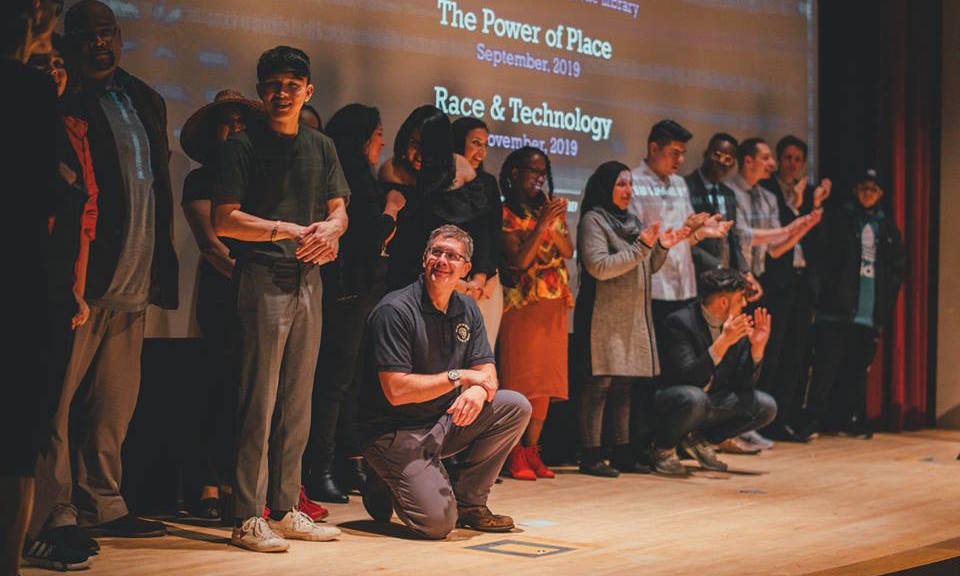 Prompted by the state murder of Mike Brown in 2014, and the public outcry and protests that followed, Pecha Kucha Seattle, in collaboration with Northwest African American Museum and the Facebook group Seattle People of Color Salon, produced Pecha Kucha Vol. 56, #Ferguson, gathering hundreds of Seattleites to pour out their hearts. Pecha Kucha Vol. 66 #BlackLivesMatter: The Movement for Black Lives, held at Seattle University in 2015, was a time to “explore the past, present and future impact of the movement in Seattle, across the United States, and around the world.”

“I don’t think an event like that had ever been done before. Ever. It was powerful,” said Ana Pinto da Silva, who brought Pecha Kucha to Seattle in 2006.

“It was wild,” she said. “That they thought we were worthy [of death threats]” was an indication that the conversation was making a difference.

PK Seattle has hosted 75 events, each one a “volume” where more than 800 leaders from across the Puget Sound region talk about their work, vision, hopes and dreams for Community. Presenters share 20 slides, each for 20 seconds, and their thoughts about what the slides depict.

The upcoming event, Vol. 76: Re-birthing A Nation: Letters from the Future, is produced in partnership with the Seattle Public Library as part of its “Art on the Plaza” series. PK Vol. 76 is a platform of ideas and solutions expressed by the area’s youth leaders and other civic leaders “dreaming for America during divisive times.”

Open to all and free as always, the event will be held at the Central Branch on Wednesday, August 28 at 6 p.m.

Pecha Kucha Seattle has been growing since the beginning.

“In the very early days, we would have these events at bars. They loved us because we’d … eat and drink and fill the bar with a hundred people,” da Silva recalled, but PK soon outgrew small venues. By its Facebook activity, she knew PK was gaining traction and “by the number of media outlets that show up to cover the events,” she said.

Pecha Kucha aims for transformative communal experience. From event space to outreach to purchasing refreshments, it all happens through community. Da Silva is encouraged by individuals and organizations “coming together and saying ‘this event is important and we’re going to help you’ … and that’s why we work on them, because we know what people truly long for are events where we as a community can share, learn, and grow together.”

Pecha Kucha means the sound of conversation “or chit chat in Japanese — pecha kucha kucha kucha.” When da Silva whispers this in her mouthpiece during a call last Winter, my ear imagined it could be the answers to what plagues the world.

When da Silva left the Bay Area community she’d come to know and love to become the design technology lead for Seattle’s NBBJ, an architectural firm, she knew no one here. That’s when a friend, Paul Jamtgaard who founded PK San Francisco, suggested she start Pecha Kucha Seattle. He knew how much community building meant to her, she said, and so she did. Looking back, she said, “He was right.”

PK Seattle has been “a total labor of love on my end, and it’s really been my teacher. What I’ve discovered through PK is that the community is brilliant,” da Silva said, “and they’re not being given enough opportunities to show and share their inherent brilliance with one another.”

To pull PK events together, an advisory board is made up of people of varied backgrounds and experience — people whom da Silva considers her mentors.

With a goal to illuminate issues that shape our lives, organizations, neighborhoods, and backgrounds, the advisory board members “brainstorm on the question, ‘who would be amazing for this event?’ and then we go back into our individual communities,” considering the same question to build a roster of potential presenters by invitation.

PK speakers are established and emerging leaders with their own unique visions. They’re “endlessly fascinating and important to the community,” but this isn’t about the most famous and powerful people in Seattle, said da Silva.

“If it were, I can tell you that I would never have gotten to 75 events. Do you know what I mean?” she said. “Because that’s just not interesting. That’s a story that’s already been told.”

Everybody is in relationship with these very complicated conditions that hurt, provoke, and inspire us, but somehow through PK, “we leave with better tools and multiple insights on something that is in fact complicated, and then we have better conversations as a result. It’s sort of like swallowing a spiky diamond,” she said.