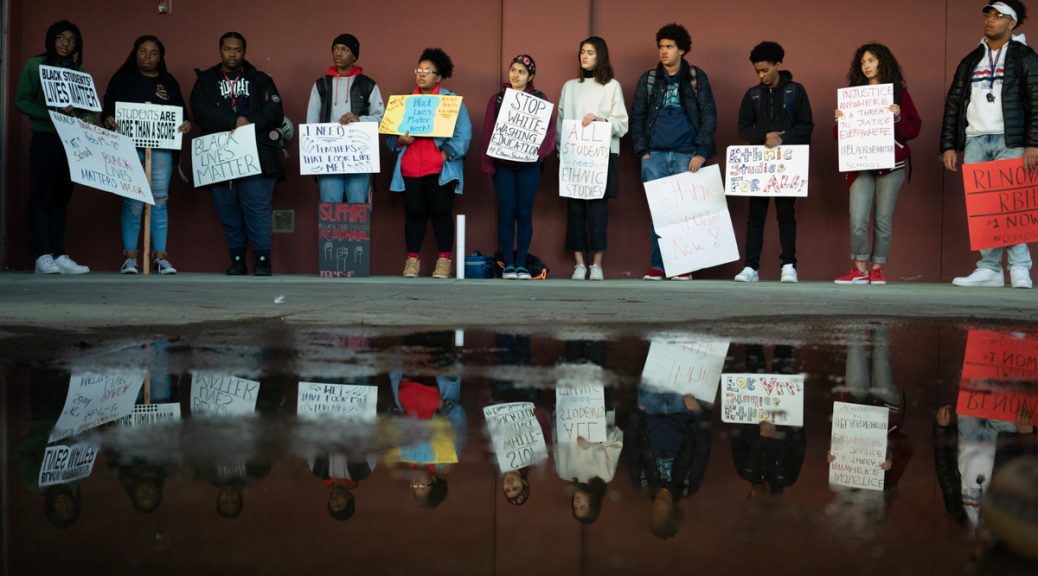 As fresh droves of people grapple more seriously with the slippery concept of systemic racism, now is the time to support the efforts of educators working to mainstream antiracist education. Three years ago, the future of ethnic studies in Seattle Public Schools (SPS) looked assured, after the school board unanimously approved a resolution in support of it. Yet the district now seems to be reversing course, and there is a closed hearing today, June 8, about the removal of SPS ethnic studies program manager, Tracy Castro-Gill, a former regional teacher of the year whose integrity and ability to cooperate are being questioned. As a massive cultural uprising marches forward seeking to address systemic racism nationwide, apparently a few folks high up in SPS’s district office seem to think it makes sense to defund ethnic studies and head in the opposite direction.

In 1968, when tensions over the Vietnam War and civil rights were reaching a fever pitch, a sustained student strike at San Francisco State University (SFSU) by a group called the Third World Liberation Front was met with intimidation and police violence. When the dust settled, SFSU agreed to accept more students of color and established The College of Ethnic Studies. Fast forward a little more than 50 years and programs have since spread across the country. Seattle’s own Ethnic Studies Advisory Group (ESAG), which reports to Castro-Gill, has been developing one of the country’s most complete programs: a K-12 teaching practice that is universally inclusive while centering the identities of various ethnicities that have been historically marginalized — specifically Black people and People of Color. Hundreds of SPS educators have voluntarily attended lengthy, unpaid summer workshops, and there is a growing feeling that this city can address systemic racism if the district supports and expands these professional development opportunities.

Simply put, in Seattle, our school system currently falls well short of creating a sense of belonging for students of color. Predominantly white teachers teach a predominantly white curriculum, and yet some of our city’s residents still choose to see the achievement gap as a failure on the part of the very communities this system excludes.

Ethnic studies is a student-centered educational practice that allows teachers to approach the diversity in their class with an asset-based mindset. Students can draw from the rich culture of their ethnicity, and in the process enrich the class. Designed in accordance with research-based best practices, ethnic studies reflect recent brain research breakthroughs that find culture plays a vital role in how learning happens. Concepts such as critical thinking and equity are woven through the academic content areas, from math to art, making it both interdisciplinary and responsive. Teachers are put into a position to build meaningful relationships with all their students — while students are put in a position to build soft skills and construct deeper personal meaning from their educational experiences. Ethnic studies does require students to wrestle with complex issues, but any city in any country aspiring to be a melting pot must acknowledge that diversity is complicated and messy but worth it, and no clean, dominant narrative will suffice.

When well-resourced and supported, ethnic studies programs have already shown they can work wonders closing the achievement gap, and yet the social and emotional benefits to the ”whole child” are incalculable. In an extensive study for the National Education Association (NEA), Christine Wheeler found, “Both students of color and white students have been found to benefit academically as well as socially from ethnic studies. Indeed, rather than being non-academic, well-planned ethnic studies curricula are often very academically rigorous. Rather than being divisive, ethnic studies helps students to bridge differences that already exist in experiences and perspectives.” Seattle’s ethnic studies educators have pointed the way forward out of an untenable situation for many of our students. But ethnic studies is not easily done well, and so it is important that their efforts be supported by the district, and if not, parents and politicians should demand it — especially those representing the South End.

At the Emerald, we feel it is important during this pivotal time to continue to center and amplify the efforts of the teachers doing this exhausting upstream work in addition to being full-time educators — a job that parents will likely have a renewed appreciation for as this 2019-2020 school year gone awry winds down. In the first group of articles in this series we’ll hear from some of the educators doing this work. The second part of our series will look at two conflicts that have arisen in response to ethnic studies and the educators who promote it. Lastly, we will hear from current and former ethnic studies students who will speak to Emerald readers about how they were impacted.

With “systemic racism” now a household phrase, it becomes more and more problematic to educate a student population as diverse as Seattle’s as we have in the past. Sidelining ethnic studies as merely a high school elective — as the district seems prepared to do — would represent the opposite of systemic change. It would mean that our city would continue to contribute to the national crisis of racial inequality exacerbated by an openly racist president, the pandemic and continued social unrest over police brutality. The connection between systemic racism and inequality is no longer deniable, and it’s time for our school district to shuffle itself over to the right side of history and address both in a profound and effective way.

The first article in this series will run later this week and will feature the amazing ethnic studies educator Amanda Hubbard.

Teachers, students, activists and organizers can sign up before June 20th for the Washington State Ethnic Studies Assembly Zoom conference, occurring on June 27th from 12-3 PST.

In the meantime, here are some articles involving ethnic studies previously run in the Emerald:

WHAT ETHNIC STUDIES MEANS TO ME

Finally, here are a couple links about Tracy Castro-Gill’s ongoing conflict with the district:

The Failures of Ethnic Studies (And How to Fix Them), Parts 1-5

Ari Robin McKenna worked as an educator and curriculum developer in Brooklyn, NY; Douala, Cameroon; Busan, South Korea; Quito, Ecuador; and Seattle, WA, and is now settled in Dunlap (just north of Rainier Beach) and writing. He is currently pitching a novella called, “On a Moonlit Landing.”

2 thoughts on “OPINION: Ethnic Studies Could Dismantle Systemic Racism in Our Schools”